For sale now: sheet music for our professional arrangements for string quartet of the three “Water Music” Suites of G.F. Handel.

These GigReady editions are easy to read and include measure numbers on every measure, rehearsal marks on major sections, and optimized page turns. All of our arrangements are gig-tested by real musicians and regularly used by Four Strings in live performance.

Prepared from the original scores, with special attention to original bowings and dynamics.

Only $6.00 (each) for high-quality a printable pdf! Available for purchase now from musicaneo.com.

Fans of the The Twilight Saga have become increasingly interested in having music from the film as a featured element in their wedding (especially after the latest installment). Four Strings has several exclusive arrangements sure to please every Twi-Hard! Because of the complexity of the music, the string quartet is really a must, though a couple of the songs are available for the string trio as well.

Bella’s Lullaby (Carter Burwell) — Quartet, Trio
Featured in the first film of the series, Bella’s Lullaby is a song composed by Edward Cullen for Bella Swan. Carter Burwell’s interpretation is by turns unsettled, passionate, brooding and sweet. We have performed an excerpt as a Bridal Processional, though it is suitable for any part of the prelude or ceremony.

Clair de Lune (Claude Debussy) — Quartet, Trio
Also featured in the first film, Claude Debussy’s Clair de Lune from Suite bergamasque is one of the most beloved pieces of classical music ever written. In the film mythology, the piece is a personal favorite of Edward Cullen, as well as Bella’s mother. The song is suitable for prelude music, and the first portion could be excerpted as a somewhat unusual Bridal Processional.

A Thousand Years (Christina Perri) — Quartet, Trio
Although the song is only featured in the ending credits of The Twilight Saga: Breaking Dawn – Part 1, Christina Perri’s A Thousand Years has proven to be a smash hit worldwide. In a wedding ceremony, it would be particularly suited as a Recessional.

River Flows in You (Yiruma) — Quartet
An interesting story underlies this piece and its inclusion on the list. River Flows in You, by Japanese pianist Yiruma, does not actually appear in any of the Twilight films or inspired-by soundtracks, but developed a widespread fan following as the piece that should have been Bella’s Lullaby. It has a quality similar to the Pachelbel Canon in D, and could be used in any portion of the ceremony except perhaps Recessional, or played in full during the Prelude.

Just finished a string quartet cover of “Sun King” from the Beatles‘ Abbey Road album – another in a series of covers for a Beatles-themed wedding. Some of the later, odder material from the band actually translates the most convincingly to the string quartet. A sample: 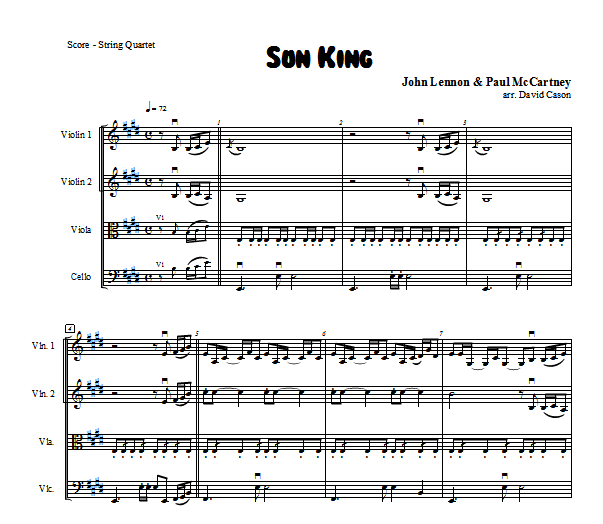 And for variety, a fully orchestrated (and substantially altered) version from All This and World War II (vocals by the Bee Gees).